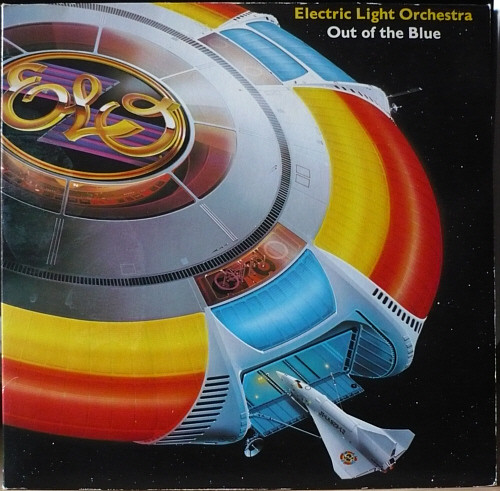 By 1977 and with two years behind me of obsessive retro radio I had developed a clear fondness for melody and harmony, though at the time it was probably more of a fondness for a song I enjoyed singing along to. Along with some cheese (I seem to remember enjoying Darts – Daddy Cool, Boy From New York City – immensely) as well as a host of ‘60s classics, I was still devouring swathes of music from the previous twenty years, still unaware of the current Top 40 charts.

It was during these years, and almost certainly listening to the Old Record Club that my love of music really began to sprout, set to grow at a rapid pace. I didn’t actually start ‘owning’ records ’til a few years later, but the first album I’d say was mine (although it wasn’t, it was my dad’s) was Out Of The Blue by the Electric Light Orchestra.

The album was, and still is, a gigantic, overblown, over-indulgent pop classic. Of course, I had very little knowledge of E.L.O prior to this album, and the fact that it was a ‘double album’ with an enormous multi-coloured space ship on the front must have impressed me too. But, I remember playing this album obsessively over a short period of time. Aged 11 I would still say sport (any and every) gave me the most pleasure in my young life, but this album and a radio show obsession, slowly but surely lead to music becoming my most beautiful infatuation.

Two years later, when E.L.O’s Greatest Hits was released containing eleven absolute gems, I probably played it more than this. Four years later The Beatles would become my musical obsession, but E.L.O’s multi-layered, harmony heavy Out Of The Blue was almost gentle opener, preparing me for the Fab Four. Jeff Lynne’s beautiful, lush production owed much to George Martin and it was the first time that listening to music would ‘take me away’. At the time I clearly had no clue about production techniques, or about rock and pop history, and whilst some may say it’s over-produced or a tad AOR, others will rightly say music is music and labels are for losers. For me, Jeff Lynne was just a genius songwriter.