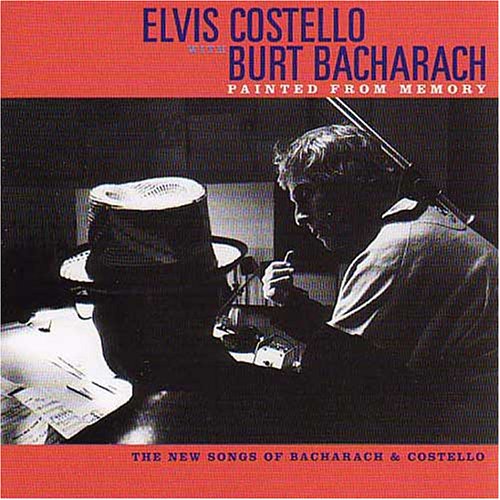 My new car journey to work was at best, just under an hour. That meant I could listen to an album going to work, then another coming home. For a good few weeks in the Spring of ’99 I’d play an album mornings and evenings, no other album got a look in. That album was Painted From Memory by Elvis Costello and Burt Bacharach. At 52 minutes it was tailor-made for my commute.

Now, I was a big fan of Elvis. From his classic singles in the late ‘70s and early ‘80s, through to Spike and Brutal Youth in the ‘90s I loved his passion, his attitude and acutely culture-referenced songwriting. Burt Bacharach is quite simply one of the best songwriters of all-time. I Say A Little Prayer, This Guys In Love With You, Walk On By, Do You Know The Way To San Jose, Anyone Who Had A Heart… with Hal David he produced a legendary back catalogue, with Dionne Warwick being the main beneficiary of their combined brilliance.

On first listen Painted From Memory sounds like it could be Burt Bacharach songs sung by Elvis Costello, as the romantic nature of many of the lyrics appear fit Bacharach’s usual style. But it most definitely isn’t. Both lyrics and music are co-credited and for me it just enhanced my love of Elvis by a sizeable notch or two.

Elvis’ usual vocal style is strained, and when singing such emotive songs of love and loss that strain is intensified, and almost all of the time that works beautifully. On the very odd occasion a sweeter, Dionne Warwicker voice would smooth and sooth over the exemplary strings, gentle horns and perfect orchestration, but then when Elvis pleads: “Does the extinguished candle care about the darkness” on the beautifully sad This House Is Empty Now, it hits hard.

I Still Have That Other Girl is a crooner’s delight and Such Unlikely Lovers is just a gem, but nothing on the twelve tracks is less than exquisite, musicality wrapped around stunning songwriting and vocals. Commissioned for a film in ‘96 God Give Me Strength was the start of this perfect collaboration, with Elvis writing in his 2015 autobiography, “To have written a song like “God Give Me Strength” and simply stopped would have been ridiculous…” Another gorgeous song of a love lost, with clear roads it met with the end of my journey, the album seeing me home feeling somehow warmer, calmer and better with the world.