In early 1990 I was still stuck on the 1960s. I was actually constantly looking all around me, searching for the good stuff. More often than not I ended up back in a familiar era. The mid ‘60s to mid ‘70s was, and still is, where it was at. The Stone Roses and Happy Mondays were pioneering the new sound, both were certainly influenced by soul and funk in particular, and both grabbed my attention. They were cool, I listened loads and liked lots, but that’s as far as it went for me.

An album that struck more of an emotional chord, whose flower child sentiment typified my own, was the debut long-player by Leonard Albert Kravitz, Let Love Rule. The blend of rock and funky reggae, heavily hippie-infused, felt loose and spaced out, like it was recorded under a fug of herbal haze. In 1990 Lenny was a complete dude, a musical maestro playing almost everything on the album; that dudeness was totally evident when we went to see him live at Kentish Town & Country Club. To say he lived up to expectations would be ridiculous restraint, he was fucking awesome, and whilst he’s subsequently (musically at least) fallen short, Let Love Rule was a ride.

I say fallen short, but could really go further. He made some decent tunes post 1990, but fame hit and instead of blossoming like Prince, he became a pastiche of himself, which could never be a good look. That said, Sittin’ On Top Of The World, Freedom Train, I Build This Garden For Us and title track Let Love Rule all oozed a mellow, blissed out psychedelic groove, and I just dug it. Lyrically the album pushed no boundaries, but it felt sincere, real and like Lenny Kravitz was gonna chop some Hendrix sized mountains.

It turned out that Kravitz was no voodoo child and no mountains were felled, but in 1990 Let Love Rule was one of the soundtracks to a summer of sizeable fun. An adventure was imminent, an idea hatched on the Costa Del Sol and planned with amigo Simon. We were going on a trip, and the start of four life-changing years of life spent mostly overseas.

By the summer of ’85 our social life was gathering pace. At age 17 I was a shy boy with limited confidence having led a sheltered and comfortable life, certainly compared to my closest friends. Life had been relatively straightforward, and my character and personality was yet to blossom. At 19 I was playing catch up with much gusto. My mates were in bands, we were hitting bars, pubs and clubs and very quickly we found our spiritual home – Charivari at The Cabaret Club.

Charivari was the brainchild of Toby Rose and Pete Young. In 1985 new romantics had all but vanished and the hip-hop and acid scene were yet to really kick in. Wham, Duran Duran, Madonna and Shakin’ Stevens were top of the pops and Bournemouth was crying out for an alternative club.

Charivari was packed on a weekly basis with nearly 300 mods, punks, goths, hippies, suedeheads, rastas, skinheads, rockabillies, beatniks and all manner of student alternatives who wanted to be amongst like-minded, wide-eyed music appreciados, and if there was one artist who seemed to be appreciado’d more than any other, it was Bob Marley. His music transcended barriers; be it musical, political or whichever youth cult you’d aspire to. The sheer joy of Could You Be Loved is futile to resist.

Legend had been released the year before and was the obvious go to album, even though most of the songs were at least faintly familiar to me already. Whilst the album showcases none of Marley’s early ska roots, it simply glows with love and empathy, pleading for kindness and unity in a world full of injustice and oppression.

Mention Jamaican culture and Rastafarianism and Bob Marley comes to mind immediately, and with a message of such genuine warmth and love, no other artist’s music has had such ability to bring people together. Whilst Bob Marley personifies reggae music, his music was enriched with funk and soul rhythms and pop melodies. His legacy lives on far beyond his music…

“The greatness of a man is not in how much wealth he acquires, but in his integrity and his ability to affect those around him positively” 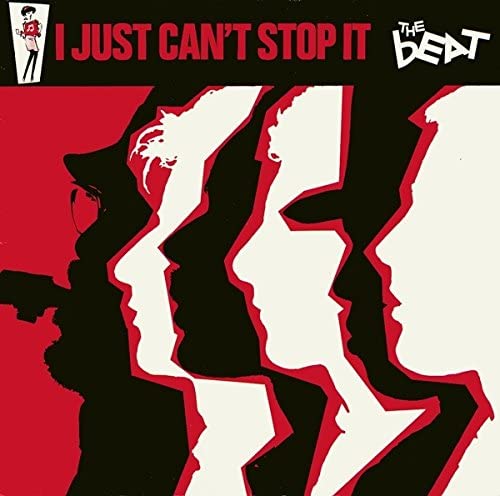 By 1980 the ‘second wave of ska’ had firmly found its place in the UK charts. Madness, Selector, Bad Manners and The Specials were having major success, and it was The Beat with their debut album I Just Can’t Stop It who cemented my love of the dance craze. By the grand age of 14 I was already checking out the roots of my chart favourites, listening to soul, ska and sixties, fascinated and obsessed as I was by the history and the culture as well as the music.

The band’s first three chart singles were all taken from this stunning LP. Hands Off She’s Mine, Mirror in the Bathroom and Best Friend were all classic singles with the rest of the album littered with covers and blatant nods towards their ska and rocksteady pioneers. As with The Specials, much of The Beat’s own writing was heavily spiced with political and cultural references born out of Thatcher’s Britain. I loved the energy of Click Click and Two Swords as much as the dubby loose-limbed groove of Jackpot and Whine and Grine, and despite some of the overtly political lyrics and cutting social comment this was still most definitely a ‘pop’ album.

It’s with far more than a large dose of dewy-eyed nostalgia that I can listen back to I Just Can’t Stop It, and still love it. Along side other debut albums by The Specials and Madness, I Just Can’t Stop It is the soundtrack to my 15th year. A year of happiness, in no small part due to the sheer energy and excitement of these albums. I remember a constant stream of innocent days full of naive and romantic positivity, and the sheer voyage of musical discovery was already an all-consuming passion.

Quite simply this is an exceptional album, brilliantly of its time and forty years later as socially relevant now as it was then. The lyrics I was devouring as a kid served as my social and political learning, missing as it was at school and at home. Forty years later my views have changed very little. A life well lived not being judged on capital gain, but one’s compassion towards others. That plus a distrust of the elite, questioning how indeed their capital was gained.

“You look like a government minister
Or a high ranking military officer
I don’t think you care
You’re just a big shot, yeah”

The only down side – the putrid cover of Andy Williams’ Can’t Get Used To Losing You – despite Everett Morton’s perfect mellow ska beat. I didn’t like it then and don’t like it now. Anyway, kids, there’s never a bad time to give your social conscience a jolt, so stream, download or just get this album.